Capehart Unloads on GOP State-Level Leadership: ‘It Looks Hideous… It Is Horrendous’

PBS anchor Judy Woodruff started with Florida: “Governor Ron DeSantis has been pushing for this — Republican-controlled legislature has now given him a raft of very — of conservative measures from what they call the Don’t Say Gay act, the Stop WOKE Act — having to do with talking about race in school — 15-week abortion bill. It’s a conservative template, and I guess the question is, does this look like the Republican playbook for the future nationally?” Capehart said yes, it’s playing out nationally.

CAPEHART: When Governor Reynolds of Iowa gave the response to President Biden’s State of the Union address, she said, among other things, Republican governors and legislators are showing what conservative leadership looks like. And, quite honestly, it looks hideous. It is horrendous.

The Don’t Say Gay bill is going to hurt LGBTQ kids and their families, the Stop WOKE Act, all to protect from discomfort and anguish white kids from learning about the true history of our country, when no one worries about the black kids in those classrooms who are learning a false or woefully inadequate history of this country.

This “Don’t Say Gay” bill doesn’t say “gay” in it. The Stop WOKE Act would ban the teaching of critical race theory. What’s funny here is that Capehart has claimed last October that “Critical Race Theory is not taught in elementary schools, middle schools, or high schools anywhere in the United States.” So why would a ban hurt anyone, if it’s not being taught?  And why does CRT prevent a “false or woefully inadequate” American history?

Then Capehart attacked other states. He described treatments that include amputating breasts and sex organs as “gender-affirming care.” If they were more explicit in describing it, the “child abuse” argument seems more obvious. 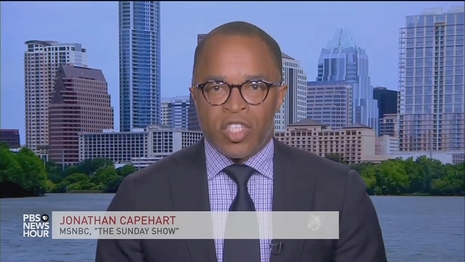 And, in Idaho, Judy, they’re going one extra step, and now making — following the Texas anti-abortion template — making it a felony for parents to provide — try to find gender-affirming care for their trans children outside of Idaho.

Capehart also attacked an anti-abortion bill in Missouri, and then concluded Republicans “talk a lot about freedom and choice and things like that for their constituents, but, quite honestly, if their constituents aren’t white, male, cisgender, heterosexual — it seems like they have no room for anyone like that in their states.“

The supposed conservative half of the panel, Gary Abernethy, claimed that probably there are no Florida schools teaching LGBT ideology in grade schools (really?), but gee, Democrats shouldn’t push too hard on it, “since people want their kids taught when most people think they should be discussing what I call the four R’s, reading, writing, arithmetic, and recess.”

PBS NewsHour is brought to you by…you, and your tax dollars. And by Johnson & Johnson.

The People Will Split the Baby

Sabotaging America”s Military From Within, by Michelle Malkin